Back in April 2015 I took some photos of an endemic millipede that glows in the dark, in Sequoia National Forest, California. I had first heard of them back in 2011, and not a single Spring season had passed since without the little critters crossing my mind. The photographic record available online was very thin so I was excited to see what they actually looked like, and to contribute to that record. After sharing the photographs with Ammonite in Bristol, UK, they asked me to go back and film the millipedes for a television program they are making.  In November, the BBC and the Radio Times published articles about Ammonite’s program, called”Life that Glows”, or “Light on Earth”, presented by David Attenborough. 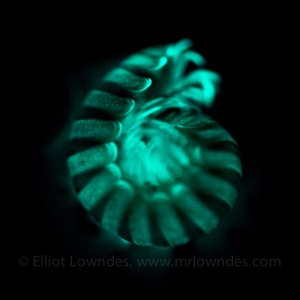 Motyxia curled up after being picked up

The footage I shot is the first time that the bioluminescence of Motyxia has been captured on video. Light on Earth contains many firsts, but I am also proud to have contributed to a television show with David Attenborough, which has been a career goal of mine.

Life that Glows with David Attenborough aired on BBC2 at 9pm on May 9th, 2016. Here is the link to watch it on BBC iPlayer (UK only).

Here are some press releases about it:

It is due to be aired on Curiosity stream in the US, Date TBA…